Things break. This is the life. This is physics. A smartphone falls and the screen breaks down. Parking space is not calculated correctly and the paint is scratched. This is frustrating, frequent, expensive and entails tedious waste of time. Sometimes the branches or even the smallest fractures are much more serious. A very small crack forms in a concrete dam. A window of a skyscraper breaks and eventually breaks down causing fragments to rain down. A microscopic break in the fuselage of an airplane is enlarged and causes it to break.

Replacing the broken screen of a tablet is one thing. Replacing the cracked window in a skyscraper is more difficult. Identifying an almost imperceptible fracture in a car with nearly six million functional parts is difficult for the naked eye. Safety standards, rigorous inspections and maintenance save lives, but it would be nice if broken things could be repaired by themselves.

Fortunately we are in the middle of the full and fascinating rise of self-regenerating materials that promise to do just that.

But what does “self-regenerating” mean in this context?

The term refers to biology and in fact that of being self-repairing is a feature of living things from DNA to self-repairing cell walls in a single-celled organism as well as the ability to self-repair the skin as a result of wounds and bones in our body.

Concrete that repairs itself

Some efforts to produce self-repairing materials really rely on the use of micro living organisms as in the case of self-healing concrete that uses microbes to produce calcite.

Particularly interesting in this context is the thermal characterization of these materials as the temperature changes.

Analyzing the variation of the parameters, such as conductivity, specific heat and diffusivity, could be of fundamental importance in the design phase of the material and in the optimization of the same.

However, most intelligent materials see the use of polymers.

The word polymer comes from the Greek and literally means “many parts”. They are essentially large molecules made up of smaller units that are repeated. The natural polymers surround us and are also in us. The cellulose of plants is a polymer, just like our DNA. The list of synthetic polymers is very long: PVC, polystyrene, nylon …

When a material breaks, at the molecular level the bonds between some of the molecules are broken. 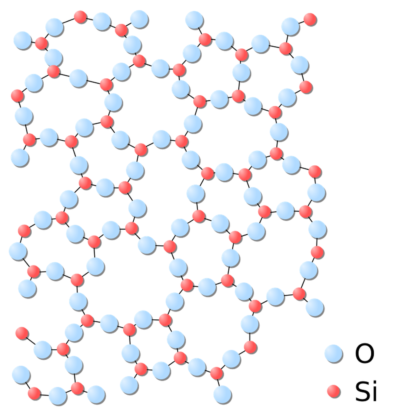 The ability of self-healing polymers is reduced to the nature of these molecular units and their ability to reorganize and reform bonds with one another. When the phone screen breaks, there is not enough energy for it to happen. The shape of the molecules is such that they can be intertwined, spread slowly and do not align well with each other. But a self-regenerating polymer can be tailor-made to become chemically “viscous” along the breakline. This is the case where filaments of polymers are connected by many pairs of sulfur atoms to form a small bridge.

The connection between those sulfur atoms is strong, but not as strong as the bonds between atoms in the main strand of each polymer, so when this material breaks, it’s the disulfide bonds that break. The atoms which split up, will quickly re-align with each other. Polymers can also be designed to respond to a variety of different energetic conditions. Perhaps just a little bit of pressure is needed, such as pressing two broken pieces together. In other cases it might be temperature. NASA has designed a polymer that isn’t bullet proof, it’s bullet permeable: a bullet will break the polymer but, simultaneously, the temperature of impact causes the polymer to flow and bond, sealing after the bullet passes through. While not ideal for body armor, it’s very useful for repairing damage to satellites and spacecraft caused by high-speed debris.

Some researchers are designing polymers capable of self-repair in the presence of certain wavelengths. Imagine setting the paint scratch on your machine by simply lighting the damaged area with a small UV light. The polymer flows into the scratch and binds, leaving no trace of the damage.

Other polymers are designed to respond to specific electromagnetic fields. This is particularly useful in the case where a polymer is not composed of the same repeating molecular unit, but instead comprises different segments and each responds to specific electromagnetic fields. As such, you can build the piece-by-piece material by changing the field you are using. This proves to be immensely useful in the construction of nano circuits.

Here are some of the recent developments to consider: